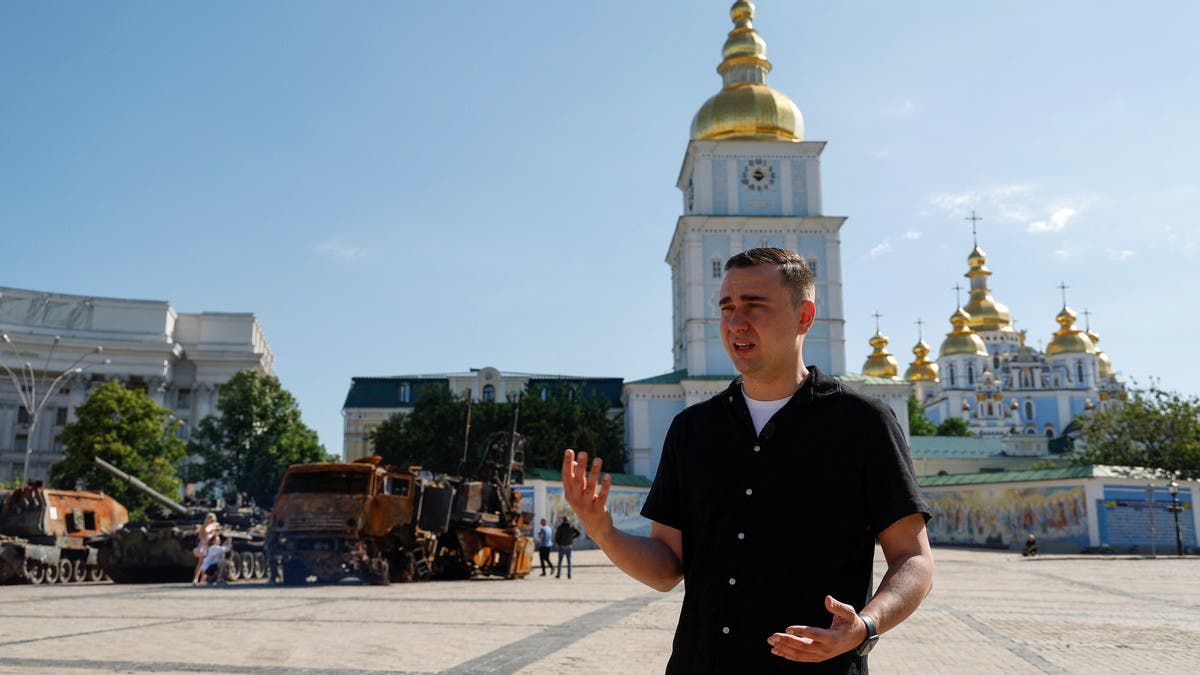 Top Kremlin critic Alexei Navalny will remain in prison as long as Vladimir Putin is in power and Russia’s opposition and Ukraine share a “common enemy” in the Russian president, one of Navalny’s top lieutenants said.
Ivan Zhdanov, a close ally of Putin’s pre-eminent domestic critic, spoke in an interview in Kyiv. He said he had come to Ukraine to see for himself the impact of Moscow’s invasion and to be able to report a true picture back to Russians.

“Putin is a common enemy for us, and we have already been fighting against him for many years,” Zhdanov, head of Navalny’s embattled Anti-Corruption Foundation, told Reuters on a central square in the Ukrainian capital.
He said Navalny’s team were interested in striking up a dialogue with the Ukrainian government.
Navalny, already serving a jail term of two and half years, received a new nine-year sentence in March for fraud and contempt of court. He said last week he had been charged in a new criminal case and could face up to 15 more years in prison.
Zhdanov delivered a bleak assessment of Navalny’s chances of being released, linking his lengthening jail sentence and new charge to the Russian invasion.
“He will stay in prison as long as Putin is in power, as long as Putin’s circle is in power,” he said.
“If Navalny was free right now…, he would be saying all the time that this war must be stopped immediately. Does Putin need such a person right now?”
Despite the huge stakes of the war in Ukraine and the Kremlin’s spiraling confrontation with the West, Putin looks politically unassailable at home for now. The Kremlin leader, in power since the turn of the century, turns 70 this October.
Zhdanov, 33, left Russia last year during a sweeping Kremlin crackdown on associates of Navalny, whose nationwide political network was declared extremist and banned.
Zhdanov heads Navalny’s exiled Anti-Corruption Foundation, which continues to produce YouTube investigations about alleged graft in Russia and helped Western governments compile sanctions lists of individuals associated with the Kremlin.
“There is no court right now, but the sanctions mechanism is a mechanism for accountability,” said Zhdanov, who is now based in the Lithuanian capital Vilnius.

Despite his bleak outlook, Zhdanov dismissed as “absolutely untrue” polling figures from March suggesting that 81% of Russians support the actions in Ukraine.
He said a huge portion of Russians simply fear answering the polls honestly: “In fact, the figures are much lower.”
Zhdanov estimated that around 25 to 30 percent of people actively support the war, while 40 to 50 percent avoid taking a strong position. More than 20 percent are clearly opposed, he said.
The Kremlin says it is carrying out a “special military operation” in Ukraine to rid it of threats to Russian security. Ukraine and its Western supporters call it an unprovoked war to grab territory.
“Russia will be carrying the cost of this war for many decades. Reputationally, financially, and in lots of other ways,” Zhdanov said.
He said he believed that Russia's actions in Ukraine constituted genocide, citing allegations of Russian war crimes in formerly occupied towns near Kyiv. Moscow denies the allegations and has accused Ukraine of staging a “provocation.”
“In Bucha, people didn’t die from artillery or mortar fire. People died there after they were arrested in the street, tied up, interrogated, and then taken to be shot. How is that not genocide?” said Zhdanov.

Russia does not expect to cut gas to more European customers