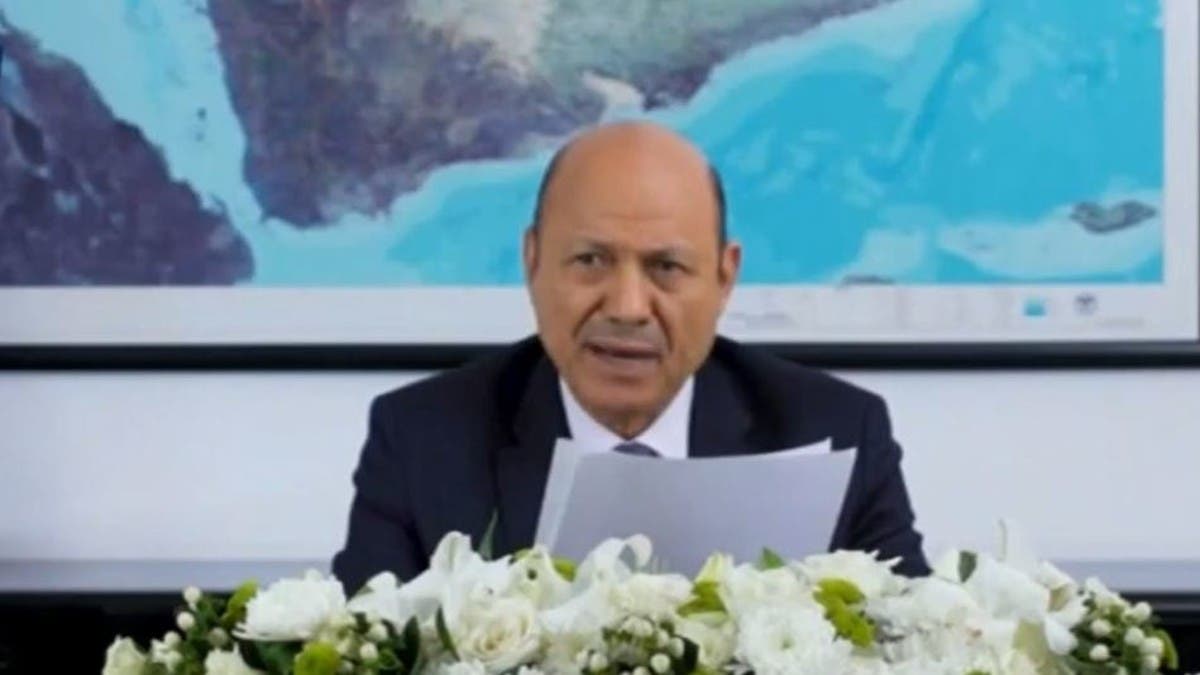 The head of Yemen’s new presidential council said on Friday he would end the seven-year-long war via a peace process, in his first speech since power was delegated to the body by the country’s president this week.

“The leadership council promises the people to end the war and achieve peace through a comprehensive peace process that guarantees the Yemeni people all its aspirations,” Rashad Al-Alimi said in the televised speech.

President Abed Rabbo Mansour Hadi, who is based in Riyadh, delegated power to the council and dismissed his deputy on Thursday, amid UN-led efforts to revive peace negotiations.

Alimi, who has close ties with both Riyadh and major Yemeni bloc the Islamist Islah party, said in his speech the council would work to deal with “challenges in all areas of Yemen without discrimination, without exception.”

The war has killed tens of thousands, devastated the economy and pushed Yemen to the brink of famine. The conflict is widely seen as a proxy war between Saudi Arabia and Iran. The Iran-backed Houthis say they are fighting a corrupt system and foreign aggression.

Riyadh has urged the council to negotiate with the Houthis under UN auspices “for a final and comprehensive solution.”

There was no immediate Houthi response to Alimi’s speech.

Houthi chief negotiator Mohammed Abdulsalam responded to the formation of the council on Thursday by calling the move a farce and a “desperate attempt to restructure the ranks of mercenaries to push them towards further escalation.”

Gulf Cooperation Council ministers have expressed their support for the council and starting negotiations with Houthis under UN supervision “to reach a final and comprehensive political solution.”

Yemen’s warring sides have agreed on a two-month truce that began last Saturday.

Read more: A look at Yemen’s new presidential leadership council and its powers

US curbs Russian access to foreign fertilizers and valves 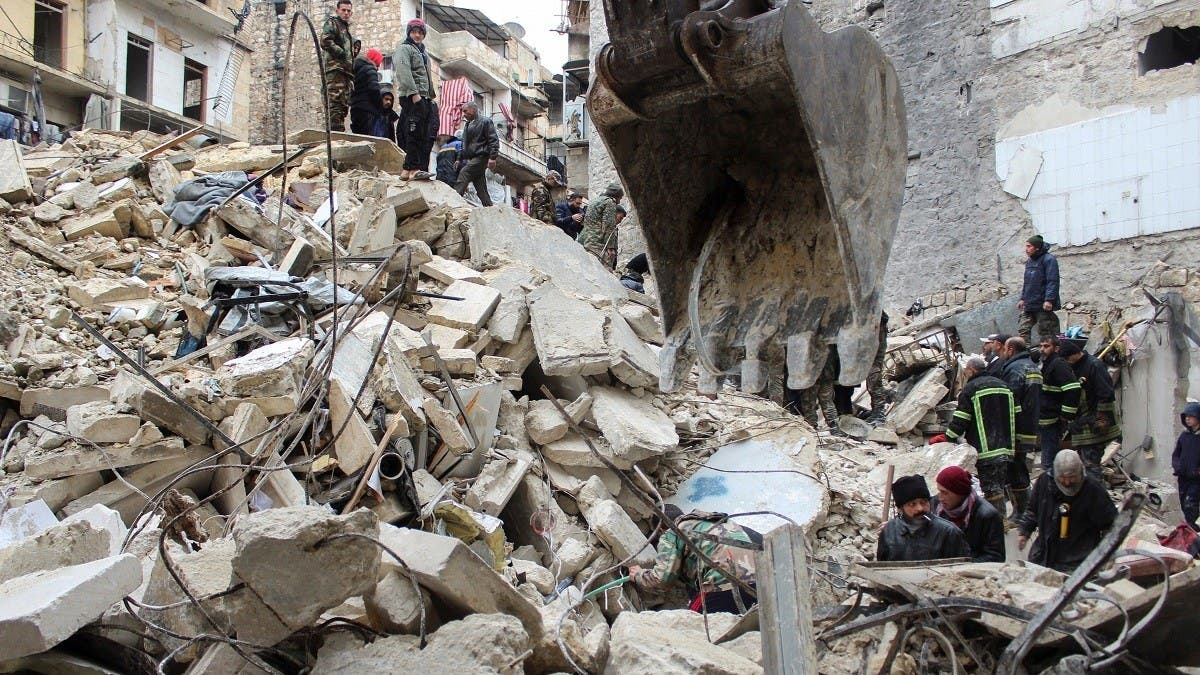 A powerful, 7.8 magnitude earthquake rocked wide swaths of Turkey and neighboring Syria on Monday, killing more than 2,300 people and injuring thousands more as it toppled hundreds of buildings and trapped residents under mounds of rubble or pancaked floors. Authorities feared the death toll would rise further as rescuers searched through tangles of metal and concrete for survivors in a region beset by more than a decade of Syria’s civil war and a refugee crisis.

Residents jolted out of sleep by the pre-dawn quake rushed outside in the rain and snow to escape falling debris, while those who were trapped cried for help. Major aftershocks, including one nearly as strong as the initial quake, continued to rattle the region.

“I don’t have the strength anymore,” one survivor could be heard calling out from beneath the rubble in the Turkish city of Adana, as rescue workers tried to reach him, said a resident, journalism student Muhammet Fatih Yavuz. He said three buildings near his home were toppled.

The quake, which was centered on Turkey’s southeastern province of Kahramanmaras, sent residents of Damascus rushing into the street and was felt as far away as Cairo and Beirut.

“Because the debris removal efforts are continuing in many buildings in the earthquake zone, we do not know how high the number of dead and injured will rise,” Turkish President Recep Tayyip Erdogan said.

The quake piled more misery on a region that has seen tremendous suffering over the past decade. On the Syrian side, the area affected is divided between government-held territory and the country’s last opposition-held enclave, which is surrounded by Russian-backed government forces. Turkey, meanwhile, is home to millions of refugees from the civil war.

In the rebel-held enclave, hundreds of families remained trapped in rubble, the opposition emergency organization, called the White Helmets, said in a statement. The area is packed with some 4 million people displaced from other parts of the country by the war. Many of them live in buildings that are already wrecked from past bombardments.

Strained health facilities and hospitals quickly filled with injured, rescue workers said. Others had to be emptied, including a maternity hospital, according to the SAMS medical organization.

The region sits on top of major fault lines and is frequently shaken by earthquakes. Some 18,000 were killed in similarly powerful earthquakes that hit northwest Turkey in 1999.

The US Geological Survey measured Monday’s pre-dawn quake at 7.8, with a depth of 18 kilometers (11 miles). Hours later, a 7.5 magnitude one struck more than 100 kilometers (60 miles) away.

The second jolt in the afternoon caused a multistory apartment to topple face-forward onto the street in the Turkish city of Sanliurfa, smashing into rubble and raising a cloud of dust as bystanders screamed, according to video of the scene.

Orhan Tatar, an official from Turkey’s disaster management agency, said it was a new earthquake, but Yaareb Altaweel, a seismologist with the USGS, said it was considered an aftershock because it took place on the same fault line as the first.

Thousands of buildings were reported collapsed in a wide area extending from Syria’s cities of Aleppo and Hama to Turkey’s Diyarbakir, more than 330 kilometers (200 miles) to the northeast. A hospital came down in the Mediterranean coastal city of Iskenderun, but casualties were not immediately known, Turkish Vice President Fuat Oktay said.

Such severe damage typically leads to a significant death toll, but bitterly cold temperatures could make matters even worse, reducing the timeframe that rescuers have to save trapped survivors, said Dr. Steven Godby, an expert in natural hazards at Nottingham Trent University. He added that the difficulty of working in areas beset by civil war would only complicate rescue efforts.

Televisions stations in Turkey aired screens split into four or five, showing live coverage from rescue efforts in the worst-hit provinces. In the city of Kahramanmaras, rescuers pulled two children alive from the rubble, and one could be seen lying on a stretcher on the snowy ground.

Offers of help — from search-and-rescue teams to medical supplies and money — poured in from dozens of countries, as well as the European Union and NATO. The vast majority were for Turkey, with Russian and even an Israeli promise of help to the Syrian government, but it was not clear if any would go to the devastated rebel-held pocket in the northwest.

In Turkey, people trying to leave the quake-stricken regions caused traffic jams, hampering efforts of emergency teams. Mosques around the region were opened to provide shelter for people unable to return to damaged homes amid temperatures that hovered around freezing.

In Diyarbakir, hundreds of rescue workers and civilians formed lines across a mountain of wreckage, passing down broken concrete pieces, household belongings and other debris as they searched for trapped survivors while excavators dug through the rubble below.

In northwest Syria, the quake added new woes to the opposition-held enclave centered on the province of Idlib, which has been under siege for years, with frequent Russian and government airstrikes. The territory depends on a flow of aid from nearby Turkey for everything from food to medical supplies.

The opposition’s Syrian Civil Defense described the situation there as “disastrous.”

At a hospital in Idlib, Osama Abdel Hamid said most of his neighbors died. He said their shared four-story building collapsed just as he, his wife and three children ran toward the exit. A wooden door fell on them and acted as a shield.

In the small Syrian rebel-held town of Azmarin in the mountains by the Turkish border, the bodies of several dead children, wrapped in blankets, were brought to a hospital.

The Directorate-General of Antiquities and Museums in Syria said the earthquake has caused some damage to the Crusader-built Marqab, or Watchtower Castle, on a hill overlooking the Mediterranean. Part of a tower and parts of some walls collapsed.

In Turkey, meanwhile, the quake damaged a historic castle perched atop a hill in the center of the provincial capital of Gaziantep, about 33 kilometers (20 miles) from the epicenter. Parts of the fortresses’ walls and watch towers were leveled and other parts heavily damaged, images from the city showed.

More than 1,500 people were killed in 10 Turkish provinces, with some 9,700 injured, according to Turkish authorities. The death toll in government-held areas of Syria climbed to over 460 people, with some 1,300 injured, according to the Health Ministry. In the country’s rebel-held northwest, groups that operate there said the death toll was at least 380, with many hundreds injured.

Huseyin Yayman, a legislator from Turkey’s Hatay province, said several of his family members were stuck under the rubble of their collapsed homes.

“I am deeply saddened by the loss of life and devastation caused by the earthquake in Turkey and Syria. I have directed my team to continue to closely monitor the situation in coordination with Turkey and provide any and all needed assistance,” the president tweeted from his official account.

“Our teams are deploying quickly to begin to support Turkish search and rescue efforts and address the needs of those injured and displaced by the earthquake,” he added in a statement later released by the White House.

The statement said Biden had called on US officials to reach out to their Turkish counterparts to coordinate on assistance, and that humanitarian groups supported by the United States were responding to the destruction in Syria.

“Today, our hearts and our deepest condolences are with all those who have lost precious loved ones, those who are injured, and those who saw their homes and businesses destroyed,” he said in the statement.

The Syrian government on Monday urged the international community to come to its aid after more than 850 people died in the country following a 7.8-magnitude earthquake in neighboring Turkey.

“Syria appeals to member states of the United Nations… the International Committee of the Red Cross and other humanitarian” groups to support “efforts to face the devastating earthquake,” the foreign ministry said in a statement.

Syrian Foreign Minister Faisal Mekdad said the Syrian government was ready “to provide all the required facilities to international organizations so they can give Syrians humanitarian aid”, after meeting with UN representatives and aid groups.

The quake killed at least 461 people and left at least 1,326 more injured in government-controlled parts of Syria, including the provinces of Aleppo, Hama, Latakia and Tartus, the health ministry said.

In rebel-held parts of the northwest of the country, at least 390 people were killed and more than 1,000 were injured, The White Helmets rescue group said.

More than a decade of conflict and years of economic sanctions have devastated Syria’s economy and its ability to respond to large-scale disasters.

The Syrian government’s main allies Iran and Russia have expressed willingness to send aid, in addition to some Gulf states that restored ties with Damascus, including the United Arab Emirates and Bahrain.

The conflict in Syria started in 2011 with the brutal repression of peaceful protests and escalated to pull in foreign powers and global militants.

Nearly half a million people have been killed, and the conflict has forced around half of the country’s pre-war population from their homes, with many seeking refuge in Turkey.

At least 2.9 million people in Syria are at risk of sliding into hunger, while another 12 million do not know where their next meal is coming from, the UN said in January.