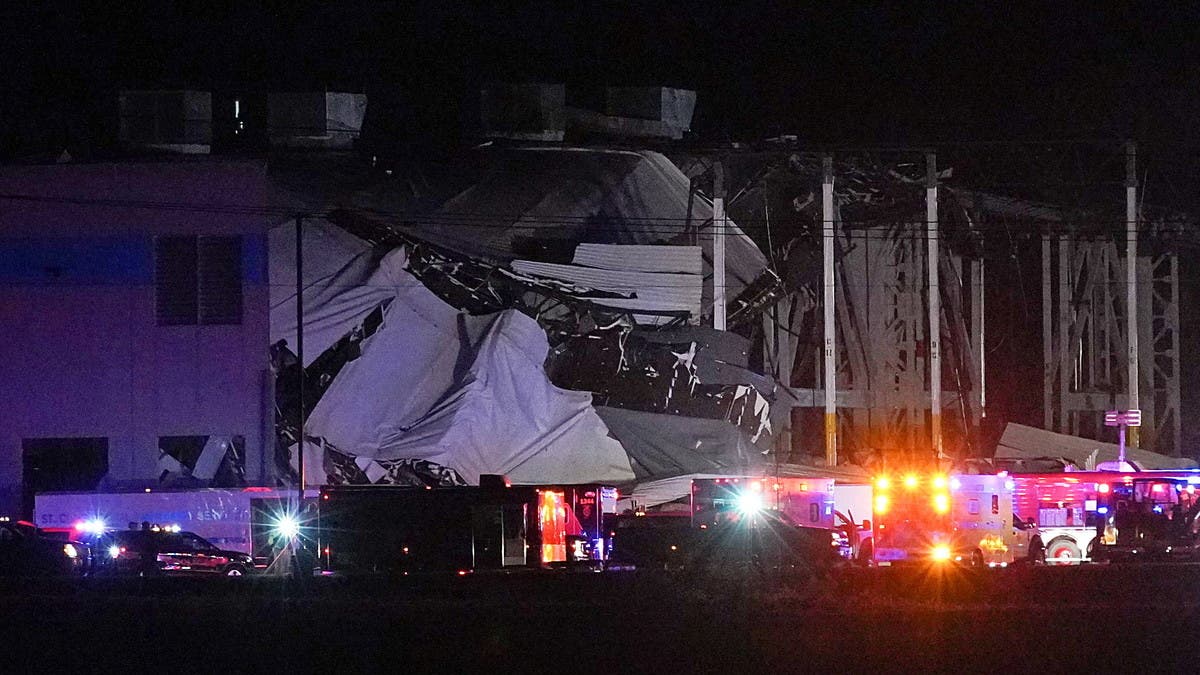 Three people died in severe weather in Tennessee, one person died and several were injured in an apparent tornado at an Arkansas nursing home, and emergency crews in southern Illinois were responding to reports of workers trapped inside an Amazon warehouse after its roof collapsed from storm damage.

At least one fatality was also reported in Missouri as severe storms, some believed to be tornadoes, swept across the Midwest and parts of the South late Friday and into Saturday morning.

In Tennessee, two storm-related fatalities were reported in Obion County in the state’s northwestern corner, said Dean Flener, spokesman for the Tennessee Emergency Management Agency. Flener said he had no details on the deaths.

Within two hours, the building had been cleared and everyone initially believed to have been inside had been accounted for, Day said.

“It looks like it’s pretty much destroyed,” Day said of the building. “… It happens quick but apparently there was a little bit of time with tornado sirens going off.” Some residents were found in the basement “and were prepared for this,” he said.

Five people had serious injuries, and a few others had minor ones, he said. The nursing home has 86 beds.

Day said another nursing home about 20 miles (32 kilometers) away in Truman was badly damaged but no injuries were reported. The residents were being evacuated because the building is unsafe.

At least 100 emergency vehicles descended upon the Amazon warehouse near Edwardsville, Illinois, about 25 miles (40 kilometers) east of St. Louis, where a wall that was about the length of a football field collapsed, as did the roof above it.

It wasn’t immediately clear how many people were hurt, but one person was flown by helicopter to a hospital.

Edwardsville Police Chief Mike Fillback said several people who were in the building were taken by bus to the police station in nearby Pontoon Beach for evaluation. By early Saturday, rescue crews were still sorting through the rubble to determine if anyone was trapped inside. Fillback said the process would last for several more hours. Cranes and backhoes were brought in to help move debris.

“Please be patient with us. Our fire personnel are doing everything they can to reunite everyone with their loved ones,” Fillback said on KMOV-TV.

The Belleville News-Democrat reported that the Amazon fulfillment center in Edwardsville opened with two warehouses in 2016, with 1.5 million square feet of space. The warehouses are used to store items until they are shipped to mail-order customers.

“The safety and well-being of our employees and partners is our top priority right now,” Amazon spokesperson Richard Rocha said in a written statement Friday night. “We’re assessing the situation and will share additional information when it’s available.”

Illinois Gov. J.B. Pritzker said on Twitter that Illinois State Police and disaster officials were coordinating with local officials in Edwardsville, and he was monitoring the situation.

“My prayers are with the people of Edwardsville tonight, and I’ve reached out to the mayor to provide any needed state resources,” Pritzker said.

It wasn’t immediately clear whether the damage was caused by straight-line storms or a tornado, but the National Weather Service office near St. Louis reported “radar-confirmed tornadoes” in the Edwardsville area at around the time of the collapse.

The storms in Illinois, Missouri and Arkansas were among several places in the Midwest that reported tornadoes spotted or on the ground.

The storms caused additional damage as they tracked through Tennessee and into Kentucky. Several buildings collapsed in the southwestern Kentucky community of Mayfield, said Sarah Burgess, a trooper with the Kentucky State Police in Mayfield.

She said several people were trapped inside a damaged candle factory in Mayfield and that a shift was ongoing when the storm hit.

“The entire building is essentially leveled,” she said.

Although no deaths were immediately reported in Mayfield, coroners were summoned to the community, Burgess said. “We do expect loss of life,” she said.

Photos posted to social media from Mayfield showed uprooted trees, a courthouse steeple sheered off and business windows blown out in the storms.

Kentucky Gov. Andy Beshear declared a state of emergency early Saturday for what he said was major tornado damage in several western counties. Beshear said the National Guard has been summoned to respond to the region.