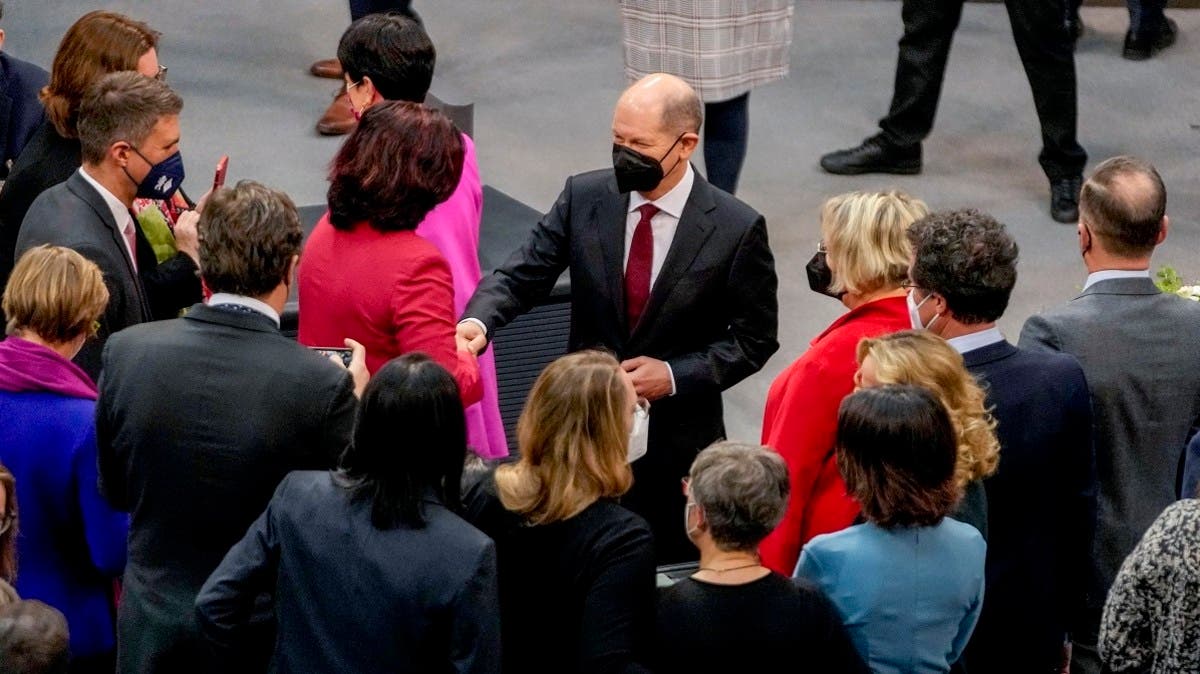 Scholz’s government takes office with high hopes of modernizing Germany and combating climate change but faces the immediate challenge of handling the country’s toughest phase yet of the coronavirus pandemic.

Lawmakers voted by 395-303 to elect Scholz as chancellor, with six abstentions. His three-party coalition holds 416 seats in the 736-seat lower house of parliament.

Scholz exchanged fist bumps with lawmakers from across the political spectrum. He was to be formally named as chancellor by Germany’s president and sworn in by the speaker of parliament later Wednesday.

Merkel, who is no longer a member of parliament, looked on from the spectators’ gallery as parliament voted. Lawmakers gave her a standing ovation as the session started.

Scholz, 63, Germany’s vice chancellor and finance minister since 2018, brings a wealth of experience and discipline to an untried coalition of his center-left Social Democrats, the environmentalist Greens and the pro-business Free Democrats. The three parties are portraying their uniting of former rivals as a progressive alliance that will bring new energy to the country after Merkel’s near-record time in office.

“We are venturing a new departure, one that takes up the major challenges of this decade and well beyond that,” Scholz said Tuesday. If the parties succeed, he added, “that is a mandate to be reelected together at the next election.”

The new government aims to step up efforts against climate change by expanding the use of renewable energy and bringing Germany’s exit from coal-fired power forward from 2038, “ideally” to 2030. It also wants to do more to modernize the country, including improving its notoriously poor cellphone and internet networks.

It also plans more liberal social policies, including legalizing the sale of cannabis for recreational purposes and easing the path to German citizenship while pledging greater efforts to deport immigrants who don’t win asylum. The coalition partners want to lower the voting age in national elections from 18 to 16.

The government also plans to increase Germany’s minimum wage to 12 euros ($13.50) per hour from the current 9.60 euros, which Scholz has said “means a wage increase for 10 million.” And the coalition also pledged to get 400,000 new apartments per year built in an effort to curb rising rental prices.

Scholz has signaled continuity in foreign policy, saying the government would stand up for a strong European Union and nurture the trans-Atlantic alliance.

The three-party alliance brings both opportunities and risks for all the participants, perhaps most of all the Greens. After 16 years in opposition, they will have to prove that they can achieve their overarching aim of cutting greenhouse gas emissions while working with partners who may have other priorities.

Greens co-leader Robert Habeck will be Scholz’s vice chancellor, heading a revamped economy and climate ministry. The government’s No. 3 official will be Christian Lindner, the finance minister and leader of the Free Democrats, who insisted that the coalition reject tax hikes and looser curbs on running up debt.

The incoming government is portraying itself as a departure in both style and substance from the “grand coalitions” of Germany’s traditional big parties that Merkel led for all but four years of her tenure, with the Social Democrats as junior partners.

In those tense alliances, the partners sometimes seemed preoccupied mostly with blocking each other’s plans. Merkel’s final term saw frequent infighting, some of it within her own center-right Union bloc, until the pandemic hit. She departs with a legacy defined largely by her acclaimed handling of a series of crises, rather than any grand visions for Germany.

Scholz told his party last weekend that “it was difficult” governing with Merkel’s bloc, which his Social Democrats narrowly beat in Germany’s September election. He criticized the Union bloc’s “this-far-and-no-further conservatism.”

The agreement to form a coalition government between three parties that had significant differences before the election was reached relatively quickly and in unexpected harmony.
“If the good cooperation that worked while we were forming the government continues to work, it will be a very, very good time for the tasks that lie ahead of us,” Scholz said. He acknowledged that dealing with the pandemic “will demand all our strength and energy.”

German federal and state leaders last week announced tough new restrictions that largely target unvaccinated people. In a longer-term move, parliament will consider a general vaccine mandate. Germany has seen daily COVID-19 infections rise to record levels this fall, though they may now be stabilizing, and hospitals are feeling the strain. The country has seen over 103,000 COVID-19 deaths in the pandemic so far.

Merkel has said she won’t seek another political role after shepherding Germany through a turbulent era. The 67-year-old hasn’t disclosed any future plans but said earlier this year that she will take time to read and sleep, “and then let’s see where I show up.”

Switzerland is close to breaking with centuries of tradition as a neutral state, as a pro-Ukraine shift in the public and political mood puts pressure on the government to end a ban on exports of Swiss weapons to war zones.

Buyers of Swiss arms are legally prevented from re-exporting them without Swiss permission, a restriction that some representing the country’s large weapons industry say is now hurting trade.

Calls from Switzerland’s European neighbors to allow such transfers to Kyiv have meanwhile grown louder as Russia’s assault intensifies, and parliament’s two security committees recommended that the rules be eased accordingly.

Lawmakers are divided on the issue.

“We want to be neutral, but we are part of the western world,” said Thierry Burkart, leader of the center-right FDP party, who has submitted a motion to the government to allow arms re-exports to countries with similar democratic values to Switzerland.

Under Swiss neutrality, which dates back to 1815 and is enshrined by treaty in 1907, Switzerland will not send weapons directly or indirectly to combatants in a war. It operates a separate embargo on arms sales to Ukraine and Russia.

Third countries can in theory apply to Bern to re-export Swiss weapons they have in their stocks, but permission is almost always denied.

“We shouldn’t have the veto to stop others helping Ukraine. If we do that, we support Russia which is not a neutral position,” Burkart told Reuters.

“Other countries want to support Ukraine and do something for the security and stability of Europe… They cannot understand why Switzerland has to say no.”

“If we had asked this question before the war…, the response would have probably been less than 25 percent.

Talking about changing neutrality was a taboo in the past,” Lukas Golder, co-director of pollsters GFS-Bern, told Reuters.

The government – under pressure from abroad after rejecting German and Danish requests for permission to re-export Swiss armored vehicles and ammunition for anti-aircraft tanks – said it would not prejudge parliamentary discussions.

Bern “adheres to the existing legal framework.. and will deal with the proposals in due course,” said a spokesman for the Department of Economic Affairs, which oversees arms-related trade issues.

Burkart said he had received positive signals on a law change from other parties in the fragmented legislature.

The left-leaning Social Democrats say they are in favor of changes, as are the Green Liberals, although the Greens remain opposed.

“Allowing arms shipments to a country involved in an armed conflict is … destroying the basis of peace and prosperity in our country,” said SVP lawmaker David Zuberbueler.

SVP member Werner Salzmann, who sits in the upper parliamentary house, disagrees, raising concerns in the Aargauer Zeitung daily about collateral damage to a Swiss defense industry that also backs the campaign for a law change.

The sector, which includes multinationals Lockheed Martin and Rheinmetall, sold 800 million Swiss francs’ ($876 million) worth of armaments abroad in 2021 according to government data, putting it in the global top 15 of exporter nations.

Having a strong arms industry has gone hand in hand with the tradition of neutrality, but the balance of this duality may now be under threat, industry association SwissMem said.

“Some of our members have lost contracts or are no longer investing in Switzerland because of the current restrictions,” said SwissMem director Stefan Brupbacher.

“Our current situation weakens our security policy…, hampers the credibility of our foreign policy and damages our companies,” he said. “It’s time to change.”