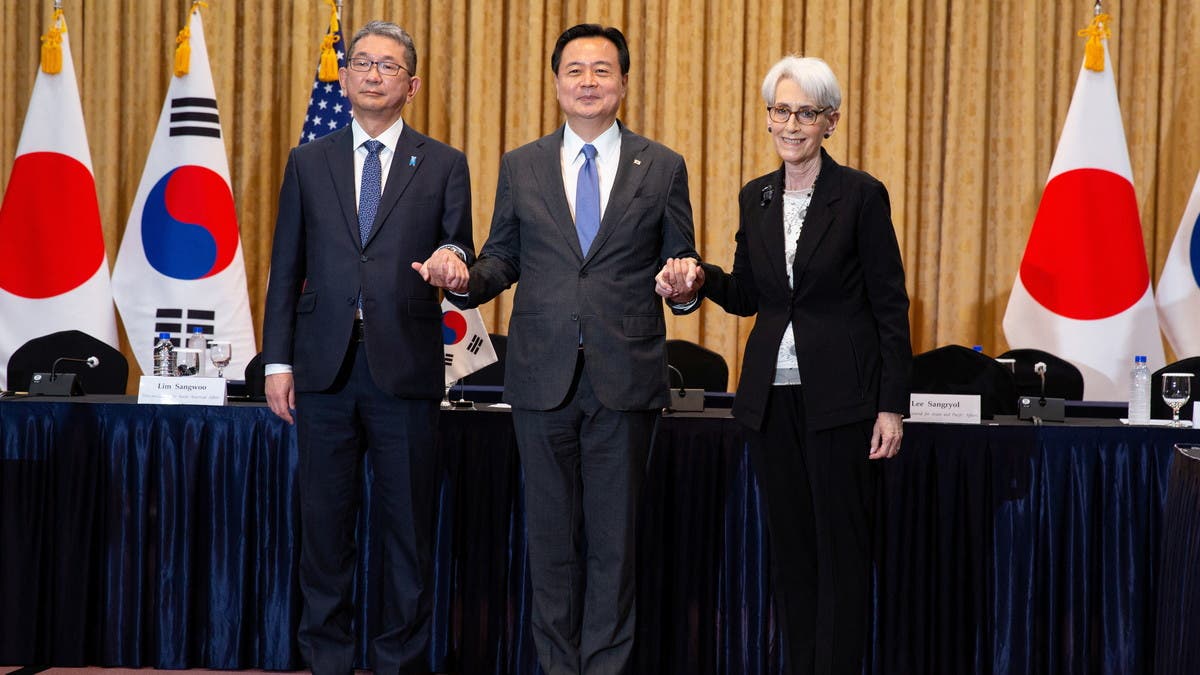 US Deputy Secretary of State Wendy Sherman met with her counterparts from South Korea and Japan on Wednesday, emphasizing the US commitment to defend its allies and trilateral security cooperation to confront an accelerating nuclear threat from North Korea.

The latest top-level meetings between the countries came as North Korea apparently presses ahead with preparations for its first nuclear test explosion in nearly five years, which US officials say could occur in the coming days.

After a meeting in Seoul, Sherman and the South Korean and Japanese vice foreign ministers issued a joint statement condemning North Korea’s provocative streak in weapons demonstrations this year and pledging closer security cooperation to curb the growing threats.

The statement said Sherman reaffirmed “steadfast” US commitments to the defense of South Korea and Japan, including “extended deterrence,” referring to an assurance to defend its allies with its full military capabilities, including nuclear.

“The United States, the Republic of Korea and Japan are fully and closely aligned on the DPRK,” Sherman said in a news conference, using the initials of North Korea’s official name, the Democratic People’s Republic of Korea.

Sherman noted that North Korea since last September has significantly increased the pace and scale of its ballistic launches, posing a “serious threat” to security in the region and beyond, and urged Pyongyang to cease taking “these provocative and destabilizing actions and to commit to the path of diplomacy.”

Jolting an old pattern of brinkmanship, North Korea has already set an annual record in ballistic launches through the first six months of 2022, firing 31 missiles over 18 test events, including its first demonstrations of intercontinental ballistic missiles since 2017.

Sherman’s visit to Asia came after North Korea in its biggest-ever single-day testing event launched eight ballistic missiles into the sea from multiple locations on Sunday, prompting the US and its Asian allies to respond with tit-for-tat missile launches and aerial demonstrations involving dozens of fighter jets.

A nuclear test would further escalate North Korea’s pressure campaign and could possibly allow the country to claim it acquired the technologies to build a bomb small enough to be clustered on a multi-warhead ICBM or on Kim’s broad range of shorter-range weapons threatening South Korea and Japan.

South Korean and U.S. officials have said the North has all but finished preparations for a detonation at its nuclear testing ground in the remote northeastern town of Punggye-ri, an assessment backed by the International Atomic Energy, which says there are indications that one of the site’s passages has been reopened. The site had been inactive since hosting the country’s sixth nuclear test in September 2017, when it claimed it detonated a thermonuclear bomb designed for its ICBMs.

North Korea will likely time the test to maximize political effect and some analysts say it could take place around a major conference of the ruling Workers’ Party that has been vaguely scheduled for the first half of June.

North Korea’s state media said on Wednesday that Politburo members met a day earlier to discuss the agenda for an upcoming plenary meeting of the party’s Central Committee that has been called by Kim to review major state affairs, including national efforts to slow a COVID-19 outbreak. He may also use the meeting to address his nuclear weapons ambitions and external relations with Washington and Seoul, experts say.

Nuclear talks between the US and North Korea have stalled since 2019 because of disagreements over an easing of crippling US-led sanctions in exchange for North Korean disarmament steps, which underscored Kim’s unwillingness to give away an arsenal he sees as his strongest guarantee of survival.

Kim’s government has so far rejected the Biden administration’s offers of open-ended talks, and is clearly intent on converting the dormant denuclearization negotiations into a mutual arms-reduction process, experts say.

US mass shootings account for 73 pct of all incidents in developed countries: Study