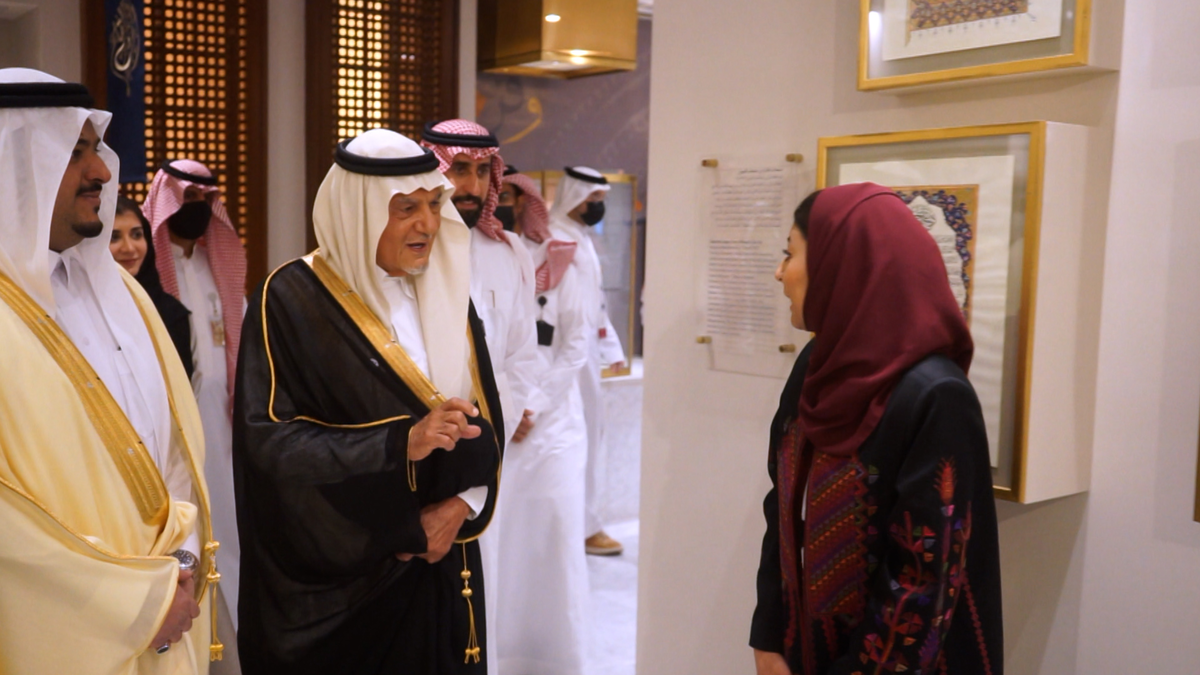 A new exhibition displaying historical manuscripts, some as old as 2000 years, was opened in Riyadh by Prince Turki bin Faisal and Prince Mohammad bin Abdulrahman, the Deputy Governor of Riyadh region on Sunday.

The Asfar exhibition located in the King Faisal Center for Research and Islamic Studies (KFCRIS) is now open to the public, offering visitors the chance to peruse a range of religious and literary works.

‘Asfar’ is the Arabic plural noun of ‘sifr’ which translates to large book or tome.

“[Asfar] consists of 36 manuscripts and printed books, and six chapters starting from ‘The Journey of Knowledge’ and ending in ‘Gutenberg’s World,’” Rana al-Shaikh, KFCRIS’ Head of Events and Exhibitions told Al Arabiya English at the opening event.

“We tried to select the rarest and the most valuable manuscripts here at the center,” al-Shaikh explained, adding that many of the works were hand-written by the authors themselves.

The exhibition includes some extremely rare original manuscripts, the only copy of which is kept at the center.

Selected works were picked from the 178,500 manuscripts that are preserved in the center’s archives, where a team works to keep them in good condition.

Prince Turki and Prince Mohammad attended a ribbon-cutting ceremony to inaugurate the exhibition on Sunday night. The royals were then given a tour of Asfar.

KFCRIS was founded in 1983 by Prince Turki, who has served as the Director-General of Saudi Arabia’s General Intelligence Directorate (GID) and was formerly the ambassador to the US, the UK, and Ireland.

The first section of the exhibition, entitled ‘The Journey of Knowledge,’ is dedicated to manuscripts from early explorers and travel writers.

It includes the second-oldest copy of the Kalila wa Dimnah by Ibn al-Muqaffah, a seminal collection of fables originally translated into Arabic in the eighth century.

In the second section, Millennium-Old Manuscripts, several examples of ancient literary works are displayed including the al-Bayan wa I-Tabyin, or Elegance of Expression and Clarity of Exposition, by the eight-century author al-Jahiz.

The third section, Women and the Endowment of Knowledge, recognizes female figures’ contributions to education in the Muslim world.

One of the works on display is a Mamluk-era Quran, notable for its size and artistic calligraphy.

In section four, By the Author’s Hand, original handwritten manuscripts are on display.

One of these is the the Kitab al-Ibar al-Mubtada wa I-Khabar, by the 14th-century historian Ibn Khaldun, which contains comments and handwritten sidenotes from the author.

Section five is dedicated to Rare Manuscripts, including a 2000-year-old tome by al-Imam Malik, written in 17AD in Granada, modern day Spain.

The sixth and final section, Gutenberg’s World displays printed works from after the advent of the Gutenberg Press.

Some notable examples include an Arabic-language bible printed by the Medici Printing House in 1591 Rome.

Dubai Art Season to kick off with unique activities in 2022

Dubai’s Museum of the Future opens: Everything you need to know

Google blocks RT, other Russian channels from earning from ads on websites, YouTube