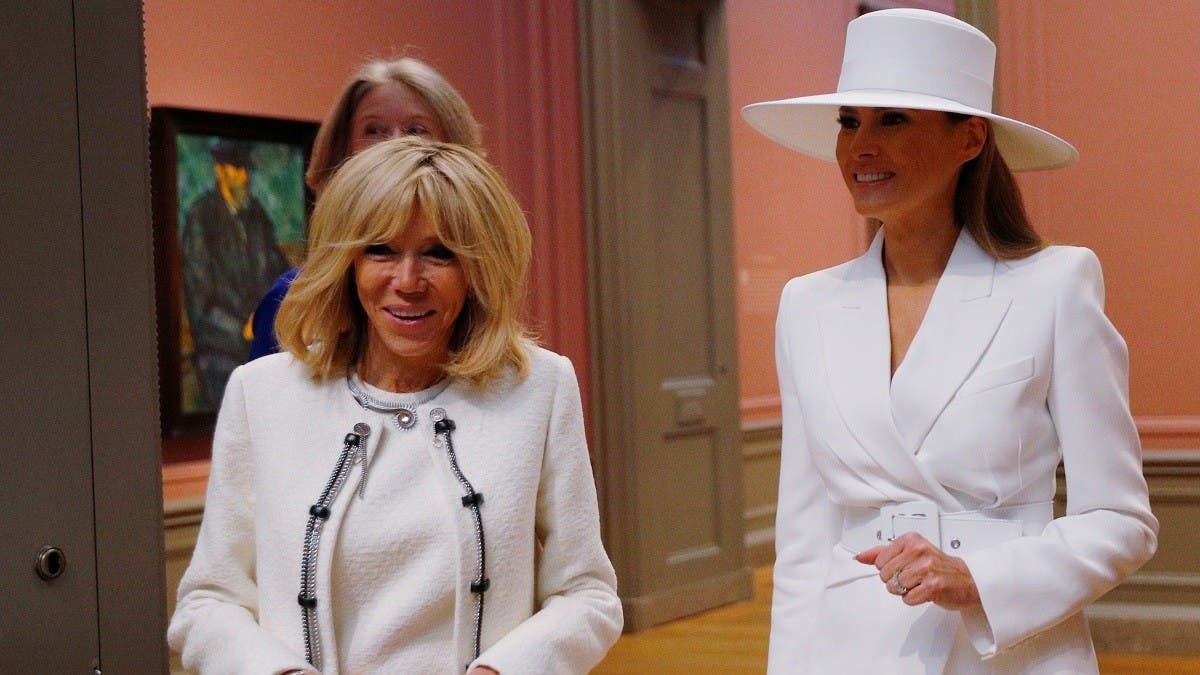 Former first lady Melania Trump announced on Tuesday she will auction off a famed white hat she wore in 2018, with accompanying physical and digitized NFT drawings.

For the latest headlines, follow our Google News channel online or via the app.
Bidding for this lot called the “Head of State Collection” will be held online between January 11 and 25, using the cryptocurrency Solana (SOL).

According to her website, where the auction was announced, bidding will begin at $250,000, currently equivalent to 1,416 SOL.

French-American designer Herve Pierre made the wide-brimmed hat at the request of Mrs Trump, who wore it as she accompanied French first lady Brigitte Macron around Washington.

The announcement states that a “portion” of the proceeds will go towards scholarships for children in foster care to learn computer skills.

Trump’s office did not immediately respond to an email by AFP inquiring about the size of the portion that will be donated.

In her first public project since leaving the White House, Trump announced last month that she would be joining the crypto trend by launching her own platform to sell NFTs (non-fungible tokens).

“I am proud to announce my new NFT endeavor, which embodies my passion for the arts, and will support my ongoing commitment to children through my Be Best initiative,” Trump said in a statement at the time.

“Through this new technology-based platform, we will provide children computer science skills, including programming and software development, to thrive after they age out of the foster community.”

Using the blockchain technology behind cryptocurrencies, NFTs transform anything from illustrations to memes into virtual collectors’ items that cannot be duplicated.

The painting was available for purchase through the end of the year for the price of 1 SOL, or approximately $150 at the time.

NFT ownership in the UAE is double the global average: Survey

Saudi Arabia revealed a 3D reconstruction of the face of a Nabatean woman who lived some 2,000 years ago in Hegra in AlUla, the country’s first UNESCO world heritage site.

Archaeologists say the woman is named ‘Hinat’, and is believed to be a woman of wealth whose remains were found in a well-preserved tomb in Hegra, along with the remains of nearly 80 other people. They added that her skull and skeleton were more complete than the rest of the remains, which pushed them to use it to start the facial reconstruction project.
For the latest headlines, follow our Google News channel online or via the app.
The reconstruction model will be put on display at the Hegra Welcome Centre in AlUla on Monday (February 6) under the supervision of The Royal Commission for AlUla.
The Nabateaens, an Arab civilization that arose centuries before Jesus, settled in Hegra in the first century BCE, after expanding south from Petra into what is now north-west Saudi Arabia, having amassed wealth as traders in frankincense, spices, and other luxury goods, a press release said.
“They’re still a fairly mysterious civilization to a lot of people and I hope that this project will enable people to engage with the faces, the characters, the story of the Nabataeans in a much deeper way than perhaps has previously been realised,” the facial reconstruction project lead at the commission, Helen McGauran said.
The team of archaeologists and other specialists gathered in London in 2019 to put together a character imagination for ‘Hinat’ and completed the 3D reconstruction in July 2020.

In pictures: Here are 6 sites in Saudi Arabia on UNESCO’s World Heritage list

Harry Styles on Sunday won the coveted Grammy for Album of the Year, a surprising victory over heavy favorites Beyonce and Adele.

The pop sensation scored the award, usually seen as the night’s most prestigious, for his third album “Harry’s House,” his most intimate yet, which combined twangy synths and soft acoustics with very personal lyrics.

“This doesn’t happen to people like me very often, and this is so nice,” he said onstage.

The album’s release marked an evolution for the one-time boy band heartthrob to the teenage masses, who has steadily grown into a heartthrob for all.

But it was not necessarily tipped for Grammy gold, as it faced off against blockbuster releases from pop’s titans.

Prior to Sunday, Styles had just one Grammy to his name, and was perhaps better known for his flamboyant style and campy stage presence than his musical chops.

Earlier in the night, he also scooped the award for Best Pop Vocal Album.

His Album of the Year triumph was sure to draw comparisons to the 2017 Grammys, when Beyonce lost out to Adele in the top category despite releasing the earth-shaking “Lemonade.”

This year, her album “Renaissance” was considered a near shoo-in for the night’s top award, especially after she became the winningest artist of all time, with 32 lifetime Grammys.

But it was Styles who ended up with the golden statuette.

“On nights like tonight, it’s obviously so important for us to remember that there is no such thing as bests in music,” he told his peers.

Highest grossing movie: Avatar 2 toppled by Knock at the Cabin after seven weeks

Knock at the Cabin, an apocalyptic horror film from director M. Night Shyamalan, was the highest-grossing movie in US and Canadian theaters this weekend, knocking out Walt Disney Co.’s Avatar: The Way of Water, which held that spot for seven weeks in a row.

80 for Brady, a comedy from Paramount Pictures about four octogenarian women attending the Super Bowl to watch their hero play, came in second place with an estimated $12.5 million in its domestic debut.

Knock at the Cabin’s debut follows a string of successful original horror films last year. Although theater ticket sales are still about a third below pre-pandemic levels, the horror genre has proved more dependable than others for studios, with the likes of Universal’s Black Phone, Paramount’s Smile and Barbarian by Disney’s 20th Century Studios all selling tickets worth about 10 times their budgets.

The film, starring Dave Bautista, is based on the 2018 novel The Cabin at the End of the World by Paul G. Tremblay. Knock at the Cabin follows a family, vacationing at a remote house in the woods, that’s taken hostage by four armed strangers demanding they make an unthinkable choice to avert the apocalypse.

80 for Brady, a rare film with an ensemble of older women, was the subject of an unusual promotion. AMC theaters offered seats at lower prices than other films running at the same time.

The Way of Water, directed by James Cameron and released in December, is the highest-grossing film to come out since the start of the pandemic and the fourth-highest of all time with $2.17 billion in global ticket sales. Until this weekend, it hadn’t faced much competition from new films. Disney has kept it exclusively in theaters, drawing out fans who want to see it in large screen and 3D formats.