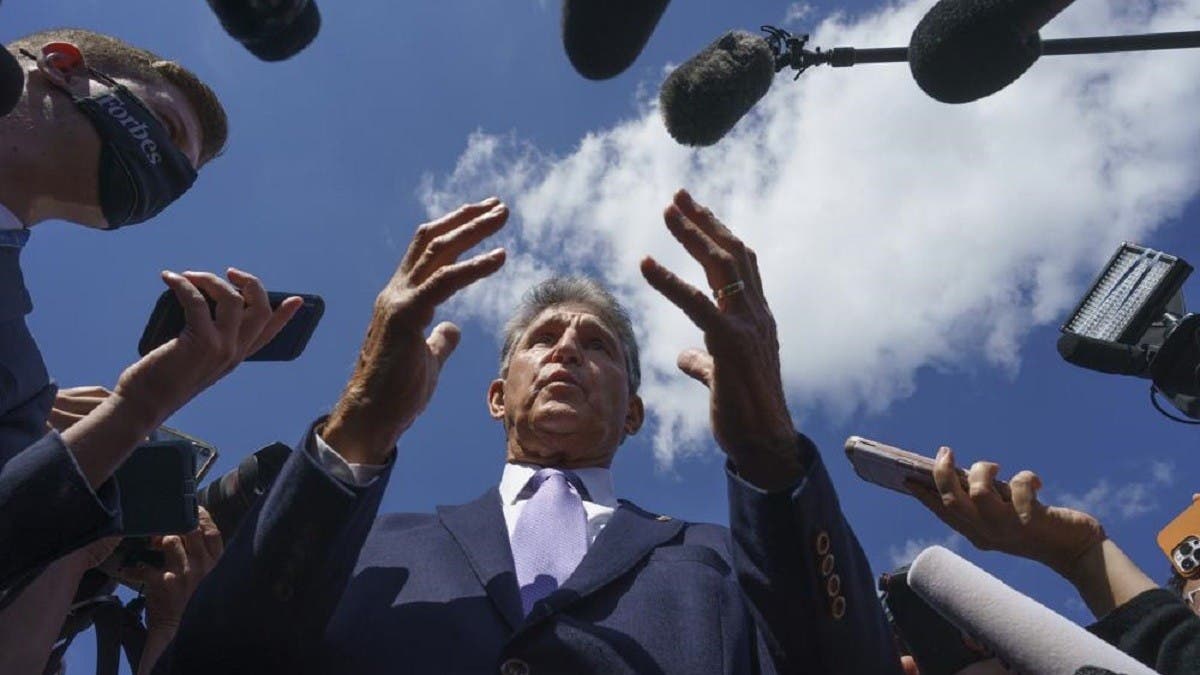 Democrats are struggling to pick up the pieces after Sen. Joe Manchin effectively crushed President Joe Biden’s big domestic policy bill. But they face serious questions whether the $2 trillion initiative can be refashioned to win his crucial vote or the party will be saddled with a devastating defeat.

Senate Majority Leader Chuck Schumer vowed on Monday that the chamber would vote early in the new year on Biden’s “Build Back Better Act” as it now stands so every senator “has the opportunity to make their position known on the Senate floor, not just on television.” That was a biting reference to Manchin’s sudden TV announcement against the bill on Sunday.

Biden and Manchin spoke later Sunday, according to a person familiar with the call, first reported by Politico. It was cordial and respectful, said the person who spoke only on condition of anonymity.

But the conservative West Virginia Democrat and his party are so far apart, his relationships so bruised after months of failed talks, it’s unclear how they even get back to the negotiating table, let alone revive the sprawling more than 2,100-page social services and climate change bill.

“We’re going to work like hell to get it done,” said White House press secretary Jen Psaki, repeating the phrase several times at a briefing but never saying how.

The setback throws Biden’s signature legislative effort into deep doubt at a critical time, closing out the end of the president’s first year and ahead of congressional midterm elections when the Democrats’ slim hold on Congress. is at risk.

Coupled with solid Republican opposition, Manchin’s vote is vital in the 50-50 split Senate on this and other initiatives, including the Democrats’ priority voting rights legislation that Schumer also promised would come to an early vote.

From the White House, Psaki struck a more conciliatory tone than her weekend hardball reaction to Manchin, saying Biden is a “longtime friend” of the senator and the president is focused on moving forward.

Vice President Kamala Harris told CBS News “the stakes are too high” for this to be about “any specific individual.” She said, “This is about let’s get the job done.”

Steeped in the politics of a state that Biden lost decisively to Donald Trump, Manchin has little to gain from aligning too closely with fellow Democrats, raising fresh questions over whether he still has a place in the party.
In a radio interview on Monday, he reiterated his position that the social and environment bill has far too much government spending — on child care, health care and other programs — without enough restrictions on incomes or work requirements.

But the lifelong Democrat was less clear when asked if the party still has room for him — describing himself as “fiscally responsible and socially compassionate.”
Manchin said: “Now, if there’s no Democrats like that then they have to push me wherever they want.”

After months of negotiations with the White House and Senate staff members as well as Biden and fellow senators, he lashed out at hardline tactics against him by those he said “just beat the living crap out of people and think they’ll be submissive.”

The next steps remain highly uncertain for the president and his party.

Biden returned to Washington from his Delaware home and lawmakers assessed their options with Congress on recess for the holiday break. The president’s reputation as a seasoned legislator who wants to show the country government can work hangs in the balance along with his proposals.

Rep. Pramila Jayapal, Democrat-Washington, a leader of the progressive caucus, spoke with Manchin early Monday, but emerged warning her colleagues the senator was an untrustworthy partner who “went back on his word.”

Jayapal said Democrats were working with the White House on alternative means of reaching the bill’s goals through executive or administrative actions, without legislation.

“We cannot make the same mistakes twice,” she said on a conference call with other progressives. “We cannot hang the futures of millions of Americans on the words of one man.”

The White House appeared to take interest in Manchin’s preference for a reimagined bill that would tackle a few top priorities, for longer duration, rather than the multifaceted and far-reaching House-passed version.

But it will be extraordinarily difficult for progressive and centrist Democrats to rebuild trust to launch a fresh round of negotiations having devoted much of Biden’s first year in office to what is now essentially a collapsed effort.
For example, Manchin wants to authorize the social programs for the full 10 years of a standard budget window — rather than just a few years as Democrats would as a way to keep the price tag down. That change would force painful cuts elsewhere in the package.

Despite Biden’s long courtship of Manchin, the senator has been clear throughout that the Democrats’ bill does not fit his vision of what the country needs, even though many residents in his state are low income, some in desperate need of the health, education and child care services the bill would provide.

The sweeping package is among the biggest of its kind ever considered in Congress, unleashing billions of dollars to help American families nationwide — nearly all paid for with higher taxes on corporations and the wealthy.
For families with children, it would provide free pre-school and child care aid. There are subsidies for health insurance premiums, lower prescription drug costs and expanded Medicaid access in states that do not yet provide it. The bill would start a new hearing aid program for seniors. And it includes more than $500 billion to curb carbon emissions, a figure considered the largest federal expenditure ever to combat climate change.

A potential new deadline for Biden and his party comes with the expiration of an expanded child tax credit that has been sending up to $300 monthly directly to millions of families’ bank accounts. If Congress fails to act, the money won’t arrive in January.

Talks between Biden and Manchin deteriorated during a final round last week that turned heated, according to a person granted anonymity to discuss the private talks.

In a stunning repudiation of his party, Manchin gave the president’s staff just a 20-minute heads-up he was about to announce his opposition to the bill.

Republicans hailed Manchin as a maverick, but Democrats and the White House were merciless in their criticism.

House Speaker Nancy Pelosi struck an optimistic chord at an event in her San Francisco district. “This will happen,” she said. “I’m not deterred at all.”