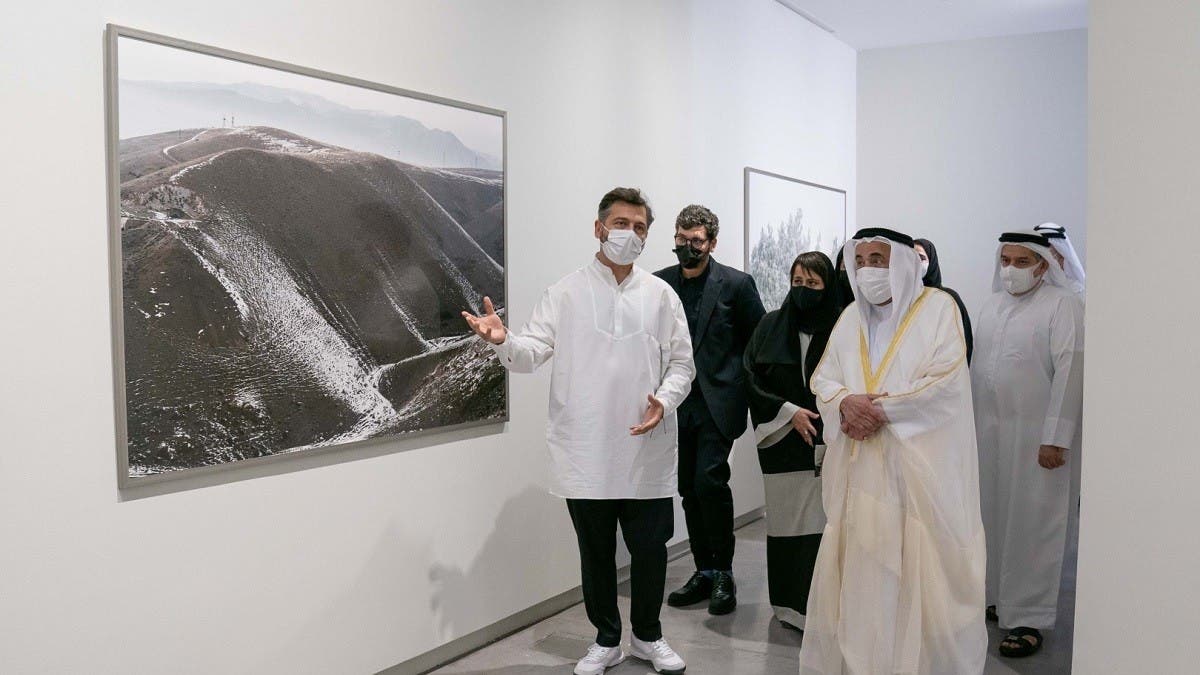 The exhibition, ‘Hrair Sarkissian: The Other Side of Silence,’ at the Sharjah Art Foundation’s Gallery 3 and 4 takes the viewer on a journey to the squares of Aleppo, Latakia, and Damascus, and through the skies of Palmyra, and the snow-covered landscapes of contemporary Armenia.
Jointly organized by Sharjah Art Foundation, Bonniers Konsthall, Stockholm, and the Bonnefanten, Maastricht, this is the first major survey of Sarkissian's practice and brings together artworks in the most extensive presentation to date.

Besides his signature life-size photographs, the exhibition showcases the artist’s works in video, sculpture, sound, and installation.
Curated by Dr Omar Kholeif, Director of Collections and Senior Curator, Sharjah Art Foundation; Dr Theodor Ringborg, Artistic Director, Bonniers Konsthall; and Stijn Huijts, Artistic Director, the Bonnefanten, ‘The Other Side of Silence’ explores histories of disappearance, the architecture of violence, and the potential of the medium of photography itself.
Born and raised in Damascus in 1973, Hrair Sarkissian is a photographer who earned his initial training in his father’s photo lab ‘Dream Color’ where he spent all his childhood vacations and where he worked full-time for 12 years after high school.
In 2010, he completed a BFA in Photography at the Gerrit Rietveld Academie, Amsterdam, where he continued using analogue large format photography as his primary medium.
Sarkissian lives and works in London since 2011.
“I use photography as a way to tell stories that are not immediately visible on the surface. Employing traditional documentary techniques and using a 4×5 analogue camera, my photographic series consist of austere, large-scale images. The constancy and beauty of the settings, however, are at odds with the socio-historical realities that they conceal. Photography is my tool to search for answers related to my personal memories and background, and I use this subjectivity as a way to navigate larger stories that official histories are unable or unwilling to tell,” Sarkissian says of his work.
“I try to engage the viewer into a more profound reading of what lies behind the surface of the image, thereby re-evaluating larger historical or social narratives. Once people become aware of the invisible elements behind my work, the physicality of the image is almost destroyed. The architecture and surroundings of the execution squares are no more than a backdrop when you see the bodies hanging in your mind; the faces upon which the zebiba (prayer bump) is imprinted are no longer individuals; the still darkness of the libraries becomes loaded once you realize what historical complexities these archives cover.”
Hoor Al Qasimi, President and Director, Sharjah Art Foundation, writes in the Foreword of the catalog that it feels fitting that this exhibition should begin its international journey in Sharjah.
Sarkissian’s relationship with SAF dates back to 2009, when his iconic ‘Execution Squares’ was included in one of the early exhibitions at the newly established Foundation which acquired the work.
Sarkissian's installation, ‘Final Flight’ was co-produced by the Foundation and exhibited during Sharjah Biennial 14 (2019).
Noting that Sarkissian became increasingly attuned to the conceptual possibilities of large-format photography, Hoor says that his approach is “to make visible that which is withheld from public records or erased from the collective imagination.”
This specifically refers to his work ‘Last Seen’ (2018-21), realized by the support from SAF. Hoor highlights Sarkissian's “unwavering commitment to making visible the legacy of trauma for the living over the disappearance of loved ones during periods of historical conflict.
“Last Seen,’ the artist’s most ambitious project to date, comprise 50 photographs representing the lives of families whose loved ones unexpectedly “disappeared” during times of conflict.
Sarkissian spent time with families with an aim to resuscitate the memory of those individuals ‘lost’ to history — withheld from life or death, in Argentina, Bosnia, Brazil, Kosovo and Lebanon. A single click presents the site of their last appearance — sites that became memorials in their own right.
As Omar Khleif notes: “Sarkissian’s work while not explicitly concerned with trauma evokes its embodiment and afterlife. The wounds and distresses of the past are made manifest through the interplay of absences. For it is within the act of silence that the author and witnesses become one.”
This is especially true of the series ‘Execution Squares’ (2008), where Sarkissian uses the camera “as an object of erasure and enclosure.”
‘Execution Squares’ depicts public squares in three Syrian cities — Aleppo, Latakia, and Damascus – where public executions used to take place. The work, comprising 14 life-size photos, came out of a personal encounter Sarkissian had as a teenager on his way to school when he saw three bodies hanging in one of these squares.
As an adult, he returns to the same locations, documenting these empty squares at dawn – the time when these executions used to happen, to erase the trauma from his memory, as well as to create a public archive of political and social reality.
‘Deathscape’ (2020) is a sound installation where Sarkissian shrouds the viewer in darkness while the sounds of scratching and distant voices invade the senses. The work was realized by attaching microphones to the bodies of forensic scientists during archaeological digs to document the soundscape as they unearthed mass tombs. The absence of any visual cues invites the mind to ponder the reality of nameless victims condemned to death by fascist regimes.
‘In Between’ (2006) explores the landscapes in Armenia covered in snow, exploring his Armenian origins with an evocative and lyrical touch.
The exhibition also includes ‘Final Flight’ (2018-2019), his multimedia commission for Sharjah Biennial 14, which explores the story of the endangered Northern Bald Ibis through print, film and sculpture. Efforts to conserve the last colony discovered in the Syrian dessert near Palmyra were constrained by the onset of the Syrian civil war in 2011, and the birds finally disappeared around the time Palmyra was destroyed in 2014.
“We live in an era where social justice has been enabled through the medium of photography and its mass proliferation. The act of re-authoring history to reflect the diversity of human memory and lived experience is at the heart of Hrair Sarkissian’s practice,” says curator Dr Kholeif.
‘Hrair Sarkissian: The Other Side of Silence’ will be on view at Sharjah Art Foundation till January 30, 2022, and Bonniers Konsthall, Stockholm,, from April 26 to June 19, 2022, before travelling to the Bonnefanten, , Maastricht, where it will be on view in late summer 2022.

Zuckerberg, wife Chan to invest up to $3.4 bln for science advances